Connection refused when connecting with Metabase to a MySQL database

I try to connect to a local MySQL database called time_series with metabase but when I connect I get the following error.

However that is a known problem until it appears that the MariaDB connector, used by Metabase, is currently not compatible with MySQL 8.

So I tried the command they propose:

But it sends back:

How are you connecting Metabase to MySQL? can you provide more info about that? Metabase is perfectly compatible with MySQL 8. E.g. try this docker-compose

Sure @Luiggi Here is my very simple configuration to connect Metabase to MySQL: 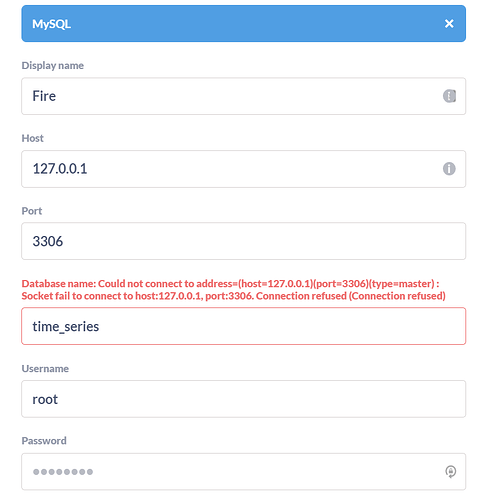 127.0.0.1 is the localhost. If the Metabase App and the database are not running in the same host that won't work. Also, MySQL needs to listen to connections if that hasn't already been configured.

The docker-compose I sent is to connect Metabase with MySQL as the application database, not as a normal data warehouse connection. Also, consider than in my docker-compose file the containers create their own network, so you'll need to make the connections on their own network, so if you need to add the app db as a new data connection in Docker then the host is "mysql" (this is the hostname inside the docker network), the port is "3306" and the user is "metabase" and password "mysecretpassword".

Running Metabase as a JAR file and running in Docker has different considerations, you need to know how the networking works on each

Okay, I figured it out and managed to connect to the default metabase by putting "metabase" in the database to reach. Thank you @Luiggi !

Why can't you connect from Metabase to the server you have the data on? you don't need to move the data

I tried, but I still have the same error: 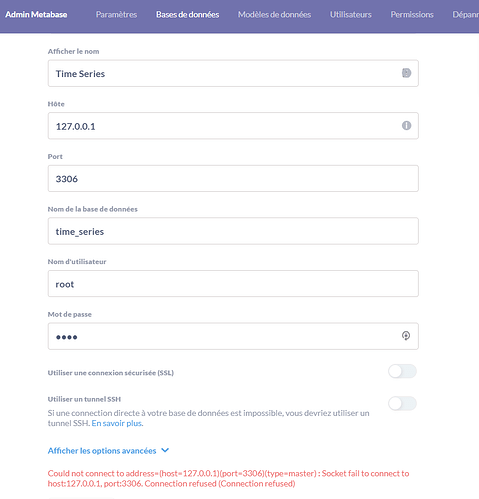 If the database is running on the HOST which is hosting the docker container, then you need to change the networking mode from bridge to host https://docs.docker.com/network/host/.

It would be easier if instead of running a container, you run the JAR