I found it a bit tricky to word this question succinctly, but here is an example of what I am trying to accomplish:

In Metabase, I am trying to recreate a feature that I've seen in other tools where you can visualize a series overlaid with the same series that has been offset / shifted by some time period, e.g. 1 year: 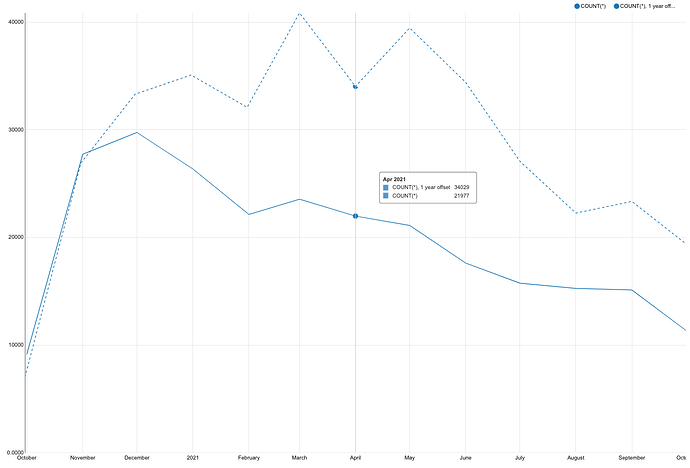 I have been able to create something like in Metabase (which looks a lot prettier) using SQL, but when it comes to doing it graphically with the notebook editor, I can only get part of the way there. For some additional context, I would like to be able to accomplish this with the notebook editor only, as there are others in my company would will likely be using / editing these dashboards in the future and are not that comfortable with SQL.

I have already read the excellent article on time series comparisons and I've even taken it a step further by using the interval() function / custom expression to allow for a more dynamic approach rather than hardcoding dates, as follows:

which yields the following:

the same also works for 2 years (or N whatever ago):

However, here is where my issues / question begin:

Do you know of a workaround for this? I suppose I would be fine with simply cutting off the current series after the current month (i.e. the line stops), rather than just dropping to zero (which on first glance looks like a bug/error).

Hi @alarmingboots
So the first problem can be solved by moving the filter to before the aggregation and using months:

It's currently not possible to change the X-axis order for timestamps. They will always be ordered by default. This is basically because it's actually returning numbers behind the scene, but is visualized as month names.

You would have to return another column, which you won't be using in the visualization, but which will be used as the sorting column.

We're working on a lot of Custom Expression functionality, which will likely land in 0.42, and should open up the possibilities a lot more:
https://www.metabase.com/roadmap/